reminds me of "the color of pomegranates", really

I actually did enjoy my visit, I've always enjoyed mazes, but my favorite part was definitely the introduction.

That's a really novel idea to create perspective like that using multiple rooms.

So far, I'm approximately 169 screens in and just found a dead end. it was a long walk back to the entrance.  A lot of fun though. It reminds me of a maze game I used to play years ago.

Almost 2 hours and probably 400 screens later.  If there is an ending to this EPIC ADVENTURE, I will find it.

I have to give it 9/10  because a maze this large deserves a Minotaur.  Actually, this is one of the best games I've played in a while.  I grew up playing Intellivision and Atari.

3 hours later.   That ending is great and yes, I enjoyed my visit. Thank you very much for making it.

Thanks for playing! I'm glad you enjoyed it. 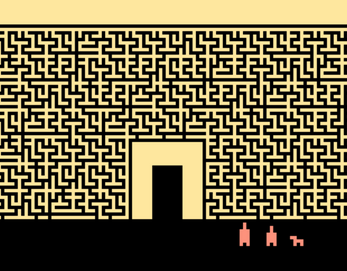